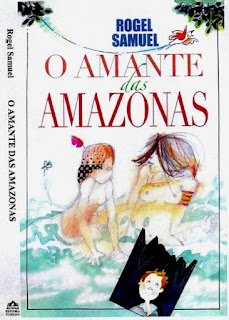 It was impossible to save the Novelty Mercantile of which only old furniture remained, out-of-style luxury.  In spite of everything, Ribamar opened the store every day.  The owner did not show up so as not to be humiliated by his creditors.  Weakened, prostrate, almost always drunk, he hid at home as if imprisoned by illness.  By and by Juca das Neves grew old.  Was he a ruined man?  Money for food began to become scarce.  He sold objects and jewelry so he could go to the market.  On the day that one of the bills which he could not settle became due, he sank into bed in anticipation of death.

But Ribamar appeared at the threshold of his door.

Ribamar had not opened the Novelty Mercantile that day.  He was already living with someone whom you will finally see entering this work of mine - Diana Dartigues.  But for the time being I will leave her in peace.  Diana was quite a bit younger than he was.

He worked there for years hardly receiving any remuneration.  Ribamar, however, was a frightfully quick learner and quickly understood the company's situation.  Juca das Neves could confide in him - in part because he was the only one.  As a sign of friendship he gave him a room in the upper part of the house, a comfortable apartment with two windows opening on the garden.  But Ribamar almost never slept there since he was already acquainted with the mysterious Diana Dartigues, about whom no one knew who she was or where she came from.  She rented a small house in the Vila Municipal, a house that had belonged to the director of the Manaus Harbour, Baron Rymkiewicz, when he arrived there in 1900.  Certainly Diana was paying the rent.  Ribamar was no longer the same.  Elegant, natty and well-groomed, he was changing into the man that people would come to know as an older man.  He wore the best clothes and inherited suits from Juca das Neves, who was the same size as the young man.  Ribamar was seen in a collection of expensive coats, English H.J., silk shirts with stiff collars.  Juca das Neves had been very rich; he ordered his clothing from the best European couturiers.  When Juca das Neves returned from Paris he brought an entire Parisian collection with him.  He was more vain than his wife and daughter.  He had a wardrobe that would dress ten men.  But he became fat, didn't work and lived on booze.  Juca das Neves saw misery as a concrete reality.  He only opened up with Ribamar - Dona Constança, already completely mad, could not comfort him.

“Tell me, my good Juca.  How much are your houses on Rua Frei Jose dos Inocentes worth?”

“Nothing, my son,” replied the old man, tiredly.  They're old houses, mortgaged ...”

Their conversation was leisurely.  At first Juca das Neves listened lying down, like a dead man.  Then, he was sitting up.  He put his foot out of the bed.  Then he was sitting on the edge of the bed, he stood up and walked around the room from one side to the other.  Following that, he started getting dressed - and lastly he left with the young man, he was someone else!  He was a changed man!  Another man entirely.

What was deduced from that conversation and became known was that Ribamar managed to have the debts put off and the next day he, Ribamar, traveled to Transvaal to the Street of Flowers, which was for sale, and he went to make a proposition in person to Dona Conchita del Carmen to bring the women from there to the city of Manaus, to the houses on Rua Frei José dos Inocentes, where they would be lodged.  In short, Ribamar was about to enter upon the biggest enterprise in the history of the Amazon crisis and the only profitable one, which would prosper from then on, mainly because it had the support of the Gonçalves da Cunha family, Commander Gabriel, then governor who would give police protection.  Juca das Neves committed to settle his debts when the establishment was up and running.

Antonio Ferreira, the ally of old Gabriel, sealed the contract himself.  For Ferreira it was better to wait and see, rather than lose everything, since nothing Juca das Neves owned could be sold and everything was pledged to the London Bank.  The bills were substitued with other bills payable in five years.  The mystery was finding out how Ribamar arranged so much money.  Clearly it came from Diana Dartigues.

After a few years Ribamar de Souza would not only pay off the debts of the business but start to get the houses from hock, not only those on Rua Frei José dos Inocentes, but also the one on Rua Barroso and even the building of the Warehouse, which had remained closed all this time.  Ribamar, with the help of Juca das Neves, modernized the Novelty Warehouse and began carrying various North American products, like Singer sewing machines - enormously popular.  Ribamar expanded his operations and started to threaten the commercial empire of the powerful  Gonçalves da Cunha family and his ex-son-in-law Antonio Ferreira.  It was then that Ribamar finally got married - in a discrete, but elegant ceremony - to Diana Dartigues.

Years later Ribamar de Souza was mentioned in connection with one of the most solid fortunes of Manaus and a political enemy of Commander Gabriel and his ex-son-in-law.  The elder Gabriel lost his prestige in the Federal Capital.  There was a mystery involving the origin of Ribamar's power that no one could quite figure out.  I don't know if you remember the figure of Diana Dartigues.  Tall, thin, elegant, Diana had a small oval head on which her long, sleek, black and shiny hair fell.  She had a dark complexion, almond-shaped eyes, a long and straight neck, fine, long hands.  You couldn't say pretty, but she was an exotic woman.  The last time one must have seen her was in the cemetery at Juca das Neves' burial.

no peito no mesmo lugar